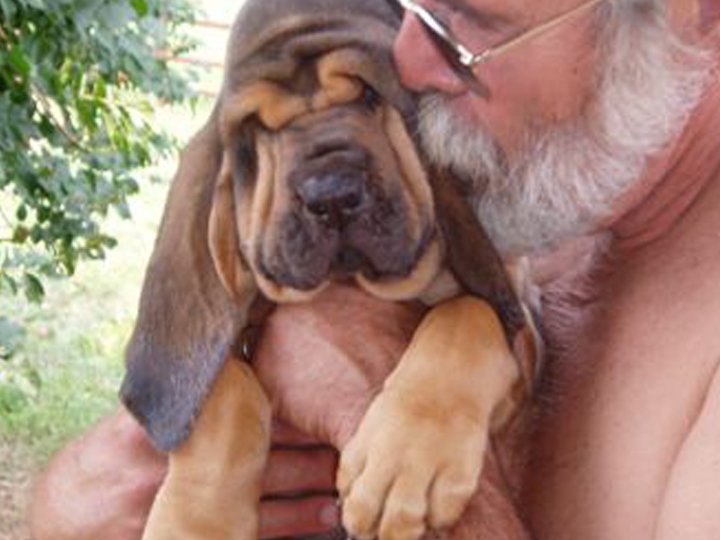 Looking for a
Bloodhound puppy? 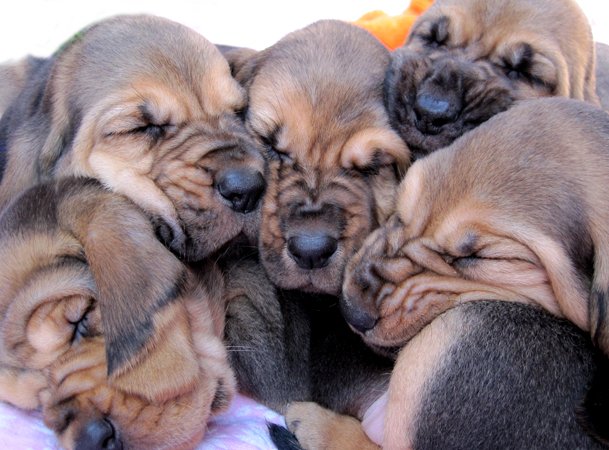 History of the Bloodhound

The Bloodhound made its appearance in Europe long before the Crusades, when the first specimens were brought from Constantinople in two strains, black and white. Established in America for over a century, it proved early on to be a tireless worker for law enforcement, being so accurate that evidence trailed by a Bloodhound has been accepted in a court of law.

The Bloodhound is a scent hound of great size and strength with a noble, dignified expression. No wonder Bloodhounds look so noble and dignified (sometimes): they have a distinguished history. St. Hubert hounds, ancestors of today's Bloodhounds, helped Europeans celebrate the Millennium in the year 1000.

Today's Bloodhounds are descended from those hounds, bred by Hubert, a 7th-century French monk who later became patron saint of hunters, and from hounds bred by other medieval noblemen who kept scent hounds as hunting dogs. Many strains, including hounds brought back to Europe by the Crusaders from the Holy Land, have blended to produce today's gentle giants. It was not until the 16th century that the Bloodhound was used to track humans.

Mantrailing has enjoyed a steady increase in modern day law enforcement and search and rescue. Trails performed by proven trailing Bloodhounds are permissible in court. "Blood," in the breed name "bloodhound," probably comes from "blooded" - meaning a hound of pure breeding. In French-speaking parts of Europe Bloodhounds are still known as St. Hubert hounds.

The Bloodhound possesses, in a most marked degree, every point and characteristic of those dogs which hunt together by scent (Sagaces). He is very powerful, and stands over more ground than is usual with hounds of other breeds. The skin is thin to the touch and extremely loose, this being more especially noticeable about the head and neck, where it hangs in deep folds.

The mean average height of adult dogs is 26 inches, and of adult bitches 24 inches. Dogs usually vary from 25 inches to 27 inches, and bitches from 23 inches to 25 inches; but, in either case, the greater height is to be preferred, provided that character and quality are also combined.

The mean average weight of adult dogs, in fair condition, is 90 pounds, and of adult bitches 80 pounds. Dogs attain the weight of 110 pounds, bitches 100 pounds. The greater weights are to be preferred, provided (as in the case of height) that quality and proportion are also combined.

The expression is noble and dignified, and characterized by solemnity, wisdom, and power.

In temperament he is extremely affectionate, neither quarrelsome with companions nor with other dogs. His nature is somewhat shy, and equally sensitive to kindness or correction by his master.

The head is narrow in proportion to its length, and long in proportion to the body, tapering but slightly from the temples to the end of the muzzle, thus (when viewed from above and in front) having the appearance of being flattened at the sides and of being nearly equal in width throughout its entire length. In profile the upper outline of the skull is nearly in the same plane as that of the foreface. The length from end of nose to stop (midway between the eyes) should be not less than that from stop to back of occipital protuberance (peak).

Skull-- The skull is long and narrow, with the occipital peak very pronounced. The brows are not prominent, although, owing to the deep-set eyes, they may have that appearance.

Foreface--The foreface is long, deep, and of even width throughout, with square outline when seen in profile.

Eyes--The eyes are deeply sunk in the orbits, the lids assuming a lozenge or diamond shape, in consequence of the lower lids being dragged down and everted by the heavy flews. The eyes correspond with the general tone of color of the animal, varying from deep hazel to yellow. The hazel color is, however, to be preferred, although very seldom seen in liver-and-tan hounds.

Ears--The ears are thin and soft to the touch, extremely long, set very low, and fall in graceful folds, the lower parts curling inward and backward.

The head is furnished with an amount of loose skin, which in nearly every position appears superabundant, but more particularly so when the head is carried low; the skin then falls into loose, pendulous ridges and folds, especially over the forehead and sides of the face. Nostrils--The nostrils are large and open. Lips, Flews, and Dewlap--In front the lips fall squarely, making a right angle with the upper line of the foreface; whilst behind they form deep, hanging flews, and, being continued into the pendant folds of loose skin about the neck, constitute the dewlap, which is very pronounced. These characteristics are found, though in a lesser degree, in the bitch.

The neck is long, the shoulders muscular and well sloped backwards; the ribs are well sprung; and the chest well let down between the forelegs, forming a deep keel.

The forelegs are straight and large in bone, with elbows squarely set; the feet strong and well knuckled up; the thighs and second thighs (gaskins) are very muscular; the hocks well bent and let down and squarely set.

The back and loins are strong, the latter deep and slightly arched. Stern--The stern is long and tapering, and set on rather high, with a moderate amount of hair underneath.

The gait is elastic, swinging and free, the stern being carried high, but not too much curled over the back.

The colors are black and tan, liver and tan, and red; the darker colors being sometimes interspersed with lighter or badger-colored hair, and sometimes flecked with white. A small amount of white is permissible on chest, feet, and tip of stern.