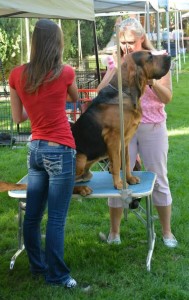 I was asked to write about my first Bloodhound National, and I am going to start with the fact that I was REALLY bummed when my grandma and her handler went to the 2013 Bloodhound National and Top 20. I do all the dog shows with my grandma, and I REALLY wanted to go, but a kid in school can’t do every dog show.

Luckily my grandma is really fair with me and told me that IF my dog (Sebastian) qualified for the 2014 Bloodhound Top 20, she would take me if my parents would allow it. So, the first step was getting my dog qualified, and it was not easy, but I am so glad it happened!

The next step was to get approval from my parents (and my school) to take a FULL WEEK off school since the Top 20 and the National are in the middle of the week. I think that was more difficult than getting my dog in the Top 20.

I thought that I should be working and preparing so that we could be our best! I did a few dog show classes, which was hard to do because they are at noon and I am in school. Mainly I practiced and practiced with my dog, things like getting him to Stand & Not Move, etc. For this I practiced with counting, how long would he stay in a stack. I practiced other things like self-stacking, and the best way to present my dog to the judge. I used a mirror for some of my work so that I could see what I was doing (my grandma does this too with her dog Major). 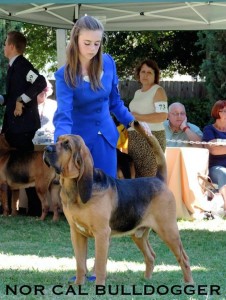 We left on Monday at 5:00 am. It was a pretty boring day driving from Colorado across Wyoming and into the middle of Nevada; about 750 miles. Luckily our dogs are good travelers and my mamaw is comfortable speeding, so we got to the hotel at 3:30 pm in Elko, NV. Nice little town, but I don’t recommend the Chinese Buffet. I got my homework all done in spite of Sebastian thinking that I was ignoring him.

Tuesday was a little shorter drive, about 500 miles, and we did not have to leave so early but still we arrived in Sacramento, CA about 3:00 pm. The hotel room was small but nice except it was on the 2nd floor and there were no elevators, so that was a pain with the dogs and luggage. Then we set up our tent and our crates, and there I was, at my 1st Bloodhound National.

I was looking forward to seeing some of the other Bloodhounds: Belle (my grandma & I bred her and I actually wanted to keep her for myself), Nathan (the #1 bloodhound- I wanted to see him and his pro handler showing), Garth (who I love and his owner, who has been so supportive of me), and Elphie (who is my Sebastian’s ½ sister) .

Wednesday we bathed our dogs and got to enjoy some time visiting with my grandma’s Bloodhound friends, and seeing a whole lot of Bloodhounds, which was more than I had ever seen before. The club had all kinds of food and snacks, which was great! The waffles were the best! 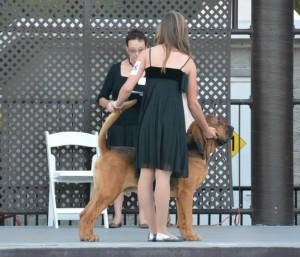 I attended the handlers’ meeting for the Top 20 and met a few of the handlers. Doug Carlson, one of the professional handlers, was really nice and told me that if I had any questions now, or ever, just to ask him. I think that was really considerate of him.

At first Sebastian & I were number 7 for the Top 20, then they changed things and arranged me last. I watched many of the dogs and their handlers, but gave most of my attention to my dog, keeping him cool and calm. I was a little nervous, but mainly just anxious to have my turn.

I think Sebastian did great at the Top 20. He moved wonderfully and the Judge Betty Anne Stenmark said to me before we went around, "last, but certainly not least". After the dogs were done and we went to mingle, there were a lot of people complimenting my dog and I.

Thursday was seriously HOT! We watched many of the dogs in the morning and I enjoyed listening to other bloodhound people talk about dogs and especially about movement. 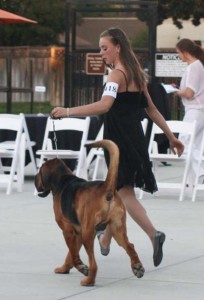 I was the only Junior handler, but that’s okay. Not many Juniors show Bloodhounds, and not many people will spend big bucks to take a Junior to a long distance National, so I was really thankful that I got to go. Sebastian did everything that I asked of him, and I enjoyed the cheering of my new bloodhound friends and supporters!

Breed was right after Juniors, and the ring was filled with many nice dogs and mainly pro handlers, a few owner handlers, and me. We were last in the breed line up, so a long time standing and waiting, and minimal shade. I was roasting, but my Sebastian showed great!

We packed the tent and crates, and settled the dogs in the air conditioned room in the hotel, and then went to the banquet. It was a bit long to sit through, but I enjoyed visiting with many of the people. Ted Taylor and several others went out of their way to tell me again how nice Sebastian looked and that I was a really good Bloodhound handler. I am grateful to have been able to attend.

Overall, I am so proud of Sebastian and very happy that I was able to go. I think there are some very nice Bloodhounds being shown. Many of the dogs with the professional handlers are very well trained, while many of the dogs with owner handlers were honestly not so prepared. I wish that I could have stayed for the Regional, but the National in the middle of the week was a problem for a kid taking time off of school.

My favorite dogs at the National, besides Sebastian and Major, were Roueltte, and I really like the way her handler presents her; and Kiss, because she reminds me of my other dog, Sassy, and because she is Sebastian’s half- sister.

My favorite people at the National have to be Karen Dewey, as she is like a 2nd grandma, Jackie Nolan, who is a like a big sister to me, and Jan Rothwell, because she is a straight talker like my grandpa!

My favorite part about the National was being able to show my dog to the crowd of bloodhound people like Suzi Paine, Janet Kelly, Heather Whitcomb and Susan Hamil. All of these experienced bloodhound people took their time to talk with me, and to encourage me with this breed and my dog!

Congratulations to all the of winners and all of the lovely dogs!

I hope to be at another National and Top 20 soon!