Fun In The Bloodhound Ring 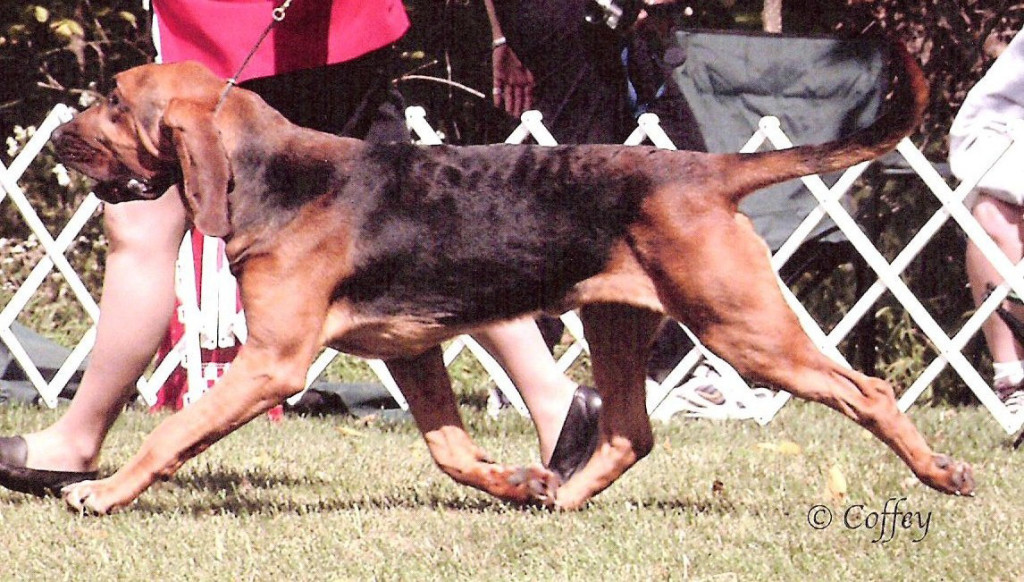 Goobers are an essential accessory for a Bloodhound. They are light and fluffy, yet thick strings of spit that Bloodhound people deal with almost unconsciously, but can nevertheless be sources of bizarre amusement. The unique consistency of a well-formed goober gives it excellent hang time when flung, but also permits it to settle gently like a butterfly when it reaches a target. There can never be a “perfect” goober, but one must have an image of the ideal in mind in order to recognize real goober quality. The closest to perfection I have ever seen was formed at an outdoor specialty many years ago.

Our judge was an older woman who took obvious pride in her “big” hair. How she managed to keep it styled that way over a three-day cluster is beyond me; she must have slept sitting upright. Be that as it may, her hair was not disturbed by stiff breezes and always looked carefully done.

At this specialty the ring was filled with dogs and bitches for the Best of Breed competition. It was a hot day. The hounds were lined up along three sides of the ring. As this sweet lady judge bent down to examine another dog in the line, one of the dogs behind her, a big male with a sloppy face, began the characteristic pre-headshake moves that told us all that a major goober was about to go airborne.

Every eye in the ring, with the exception of the judge’s, watched in stunned fascination as an eight-inch slug broke off and launched itself in the judge’s direction. To this day I can remember how it seemed like it was in slow motion, twisting and turning itself as it sailed through the air and draped itself on the back of the judge’s hairdo. It seemed like it took two minutes to follow its flight path. Every face in the ring, with the exception of the judge’s, contorted in agony as we tried NOT to look at one another. Two or three more dogs were examined and gaited while the goober proudly rode around on the back of the carefully coifed hairdo. These dogs could have all been lame and only the judge would have noticed because the rest of us were mesmerized by the goober’s new home and fixated on it as we wondered what it would do next. Would one end begin to slowly lose its grip on the hair and start oozing off? Finally, the ring steward, another sweet older woman who knew the reaction a goober-in-the-coiffeur would cause for the judge, came over with a paper towel to get the “ladybug” off the judge’s hair. Everyone in the ring, with the exception of the judge, simultaneously began to breathe again but we still could NOT look at one another until the judging was over.

Of all my show ring experiences, two stand out in my mind as so memorable that I can recall every moment as if I were watching a DVD over and over again. One was when my Bred-by-Exhibitor dog went Winners to finish his championship at our National Specialty. The other was that amazing slo-mo goober tumbling through the air, to eventually find a landing zone in the judge’s hairdo!