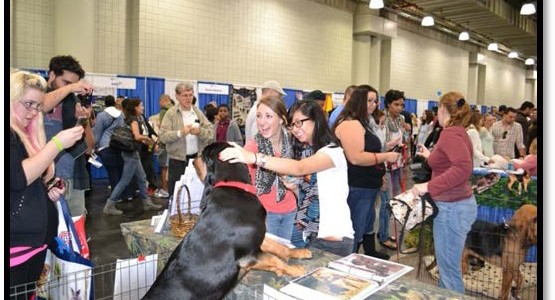 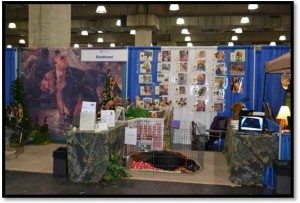 It wasn’t quite raining cats and dogs, but the New York City streets around Jacob K. Javits Convention Center were full of canines, felines, and their owners with carriers and kennels in tow for the American Kennel Club’s grand extravaganza event- Meet The Breeds (MTB). For the fourth year in a row, the AKC in conjunction with Pet Partners Insurance and The International Cat Association (TICA) provided parent clubs the opportunity to share our knowledge and expertise about dogs and responsible dog ownership with the general public on October 20 and 21, 2012. 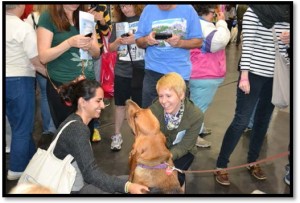 The Javits Center doors and loading docks were a hive of activity the Friday before the event began as vehicles of all sizes and shapes pulled up and unloaded booth sets, decorations, and containers . Nomad tents, Greek columns, cut outs of the royal family, castle parts, dog sleds, Chinese dragons, wooden docks, beds, couches, and more brought the 300,000 square foot facility to life in ways honoring the history of the dog and cat breeds present. The American Bloodhound Club booth in the NE Region pays tribute to our scent hounds by using a canvas copy of the oil painting, "On Scent," by John Sargent Noble as the backdrop for our set. The original oil painting, donated by Robert V. and Nancy Lindsay (emeritus honorary members) hangs at the AKC Museum of the Dog in St. Louis, MO, and depicts a forest scene with two bloodhounds in the forefront, one with nose to the ground, and the second with head in the air, sounding off with a characteristic bay while their owners in kilts follow behind. A forest floor 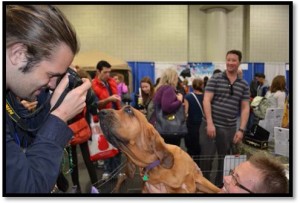 of ferns and plant life compliment the back drop while pine trees, rocks, and brush complete the booth’s outdoor look. Additionally, the booth celebrates our hounds and their quirks as they dig, climb, trail, drool, swim, track, perform obedience, rally, agility, and now lure coursing in pictures hanging quilt fashion. Tables with forest camouflage material contain flyers, coloring sheets, stickers and three ring binders with more information on life with bloodhounds. This year we paid for electricity to the ABC booth and had a continuous slide show of photos running which showed video of bloodhounds working, showing, and being our companions so that all three breed colors and their shades in between, could be enjoyed by the public. 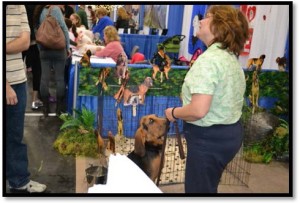 While pictures and video are really enjoyed, the dogs (and cats in the cat area) are the stars of this event. Whether one has read stories about a breed, or watched the movies from Hollywood, there is nothing that compares to the opportunity for hands on. The opportunity to pet, hug, and have your photo taken with each breed is a huge draw for the public, and of course the bloodhounds were show stoppers. The event doors open at 10:00am and remain so until 5:00pm. During that time, the bloodhound booth is swamped with adults and children of all ages. If your bloodhound enjoys having his/her picture taken, then this is the place to be. Kids with cell phones and professional photographers took turns immortalizing wrinkles, ears, flews, and kisses in their lenses. There are not adequate words to thank the following people and their hounds for staffing the booth this weekend: 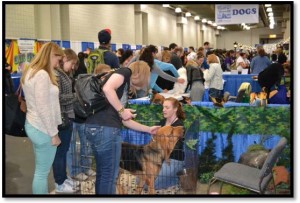 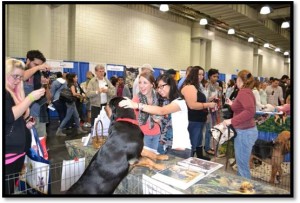 The public is fascinated with bloodhounds, and the above hounds were outstanding representatives of our breed . The best way to explain how busy the booth was, and how much petting the dogs experienced is to tell you that I had 10,000 various flyers and brochures printed and 5,000 stickers for kids- we were wiped out of everything but contact cards by 3:00pm on Sunday. Luckily, the AKC had 500 flyers of the brochure that goes out with puppy registrations, so we had information to continue handing out. Since many of our hounds and people were at Javits by 8:30am, and we still had people at the booth after 5:30pm, it is easy to say that it was a long day/s for all.

This year the Bloodhound booth won a rosette for its décor, information, and overall content. Once again, many thanks to all that staffed the booth and to all of those wonderful hounds! 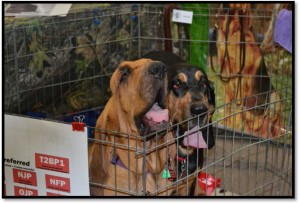 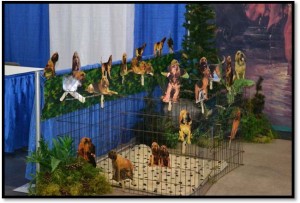 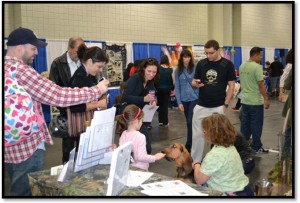