The Bloodhound: Truly A Purpose-Bred Hound 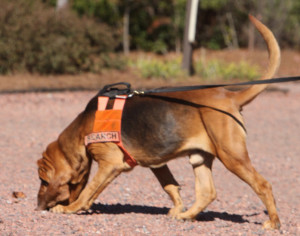 The bloodhound is not an easy breed to judge. There are only a few breeds in which an abundance of skin is desirable and those are equally as difficult to sort through. But let’s not forget that the purpose of the breed as a cold-nosed methodical hunter gives us all the clues and reminders of just what it is we are looking for when we make selections in the bloodhound ring.

Centuries ago, when hunting was less a sport than it was a means to provide food using a bow and arrow, no meat source was allowed to go wasted. A wounded stag might travel for miles before it eventually succumbed to its wounds. Thus a hardy hound that could follow an aged trail to its eventual quarry without giving up due to fatigue was highly esteemed. The bloodhound was carefully developed in Medieval times to fill this need. In more recent times its keen nose and discriminatory scenting ability became more valued as a means to identify poachers, track down criminals, and find lost people.

We must never lose sight of the purpose of this breed! Over the years many, many of the highly-ranked show bloodhounds also earned titles in tracking and mantrailing. As well, many of the most successful police or search and rescue bloodhounds came from show-bred litters. As dog shows trend toward rankings and away from breeding, the American Bloodhound Club does not want to see a division in the breed between “show type” and “working type.” The hounds that judges select must be remarkable in how closely they conform to what is needed to do their job.

So what do we look for? Your overall impression should be one of substance combined with athleticism. The bloodhound will tirelessly follow a specific scent without heed of undergrowth, uneven ground, or obstructions. The gait varies from snuffling in place all the way up to a fast trot or lope, but all the while the head is down and the nose is close to the ground. 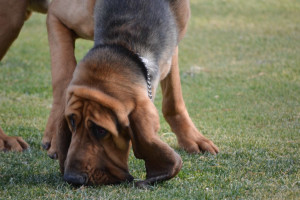 Look for a dog that conveys both strength and flexibility. Upright shoulders will never do. He needs a well laid back shoulder with three to four fingers’ width between the tops of the shoulder blades to allow free movement of the neck. The neck needs to be long enough to get the head to the ground and strong enough to carry that big head for miles. A complete return of upper arm, such that the point of the elbow is directly under the withers, will allow that hound to hunker down into a thicket where a lost toddler might have curled up to sleep.

The body outline you want to see is deep and slightly rectangular, with a noticeable forechest, well-sprung long ribcage well let down between the forelegs, and no real tuck-up. The depth of body should carry throughout in a mature animal. The loin needs to be short and strong, and the haunches muscular. A racy outline or lack of bone should not be rewarded, regardless of how dramatic the sidegait! Watch, too, for strength in the back and loin when the hound both stands and moves. A dip in the topline or bouncing on the move indicates either a weak loin or a hound that is terribly out of condition. Neither of these will hold up well over the miles.

To support this powerful structure requires strong legs and feet as well. Overangulation in the rear makes for fabulous sidegait but does the dog absolutely no good on the trail; drive will be lacking and the rear will fatigue quickly. An imaginary plumb line drawn from the point of the buttock to the ground should intersect the foot, not end up well ahead of it. In the front leg, a slight slope to the pastern provides shock absorption as long as the pastern is strong and the foot is well-knuckled and thickly padded. The large toes can spread to handle rough footing but a splayed or flat foot eventually means a lame hound. 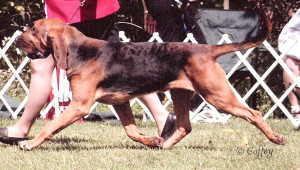 The standard calls for “elastic, swinging and free” movement. This describes ease and fluidity, not bouncy with a lot of wasted motion. When stacked and viewed from the front or rear, the legs should follow a straight line from body to ground. Moving, a correct bloodhound will converge toward the midline but should never cross over. From the side, reach should extend forward to well under the head, without excessive lift of the carpus. The rear leg should reach well under the dog and then drive smoothly, with a good follow-through.

Don’t be afraid to ask the handler to slow down. This breed shows much better at a slow trot than it does racing around the ring. And do expect that the bloodhound’s big head will most likely be carried out ahead of him rather than up like an Afghan. There are a lot of good smells down there that he would like to sample! 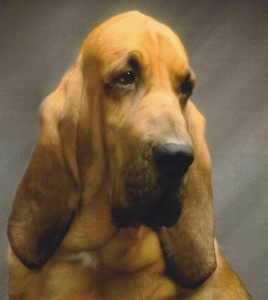 The bloodhound head should have relatively parallel planes when viewed from the top and somewhat parallel planes when viewed from the side. The skull is long and narrow, flat on the sides, with a prominent occiput. The stop is only slight but may be accented by skin folds at the brow. Deep-set eyes outlined by the lids in a diamond or lozenge shape, a strong muzzle at least as long as the backskull, a large nose, lips hanging well below the underjaw, and all of it framed by very low-set, curled-in soft ears that reach well beyond the tip of the nose – that’s what you want to see. The lips merge into obvious flews that themselves continue into the pendulous dewlap. The skin, particularly around the head and neck, is thin and surprisingly mobile.

At the other end is the tail. Ideally, the topline does not drop off at the croup, so the tail is carried relatively high in a saber shape, but not over the back. Inexperienced youngsters might carry their tails lower but you should not award a dog with its tail carried between its legs. The breed is reserved but should not be afraid or spooky. 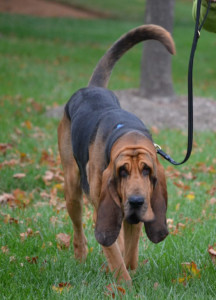 There is a part of the standard that seems to suggest that bigger is better. Keep in mind that the standard was written many decades ago when canine nutrition was rudimentary and our dogs were a lot smaller than they are today. The standard calls for males to be around 90-110 pounds and bitches 80-100; bloodhounds of those sizes would appear fairly small compared to most of the dogs that are out there now. The size pendulum may have swung a bit too far in the direction of large, which could negatively affect the breed’s agility and purpose. The best bloodhound is not the biggest; it is the one with the right combination of all the attributes that support its ability to do its job.

This article was originally published in the Canine Chronicle May 2014 online edition.