What I didn’t know about Bloodhounds 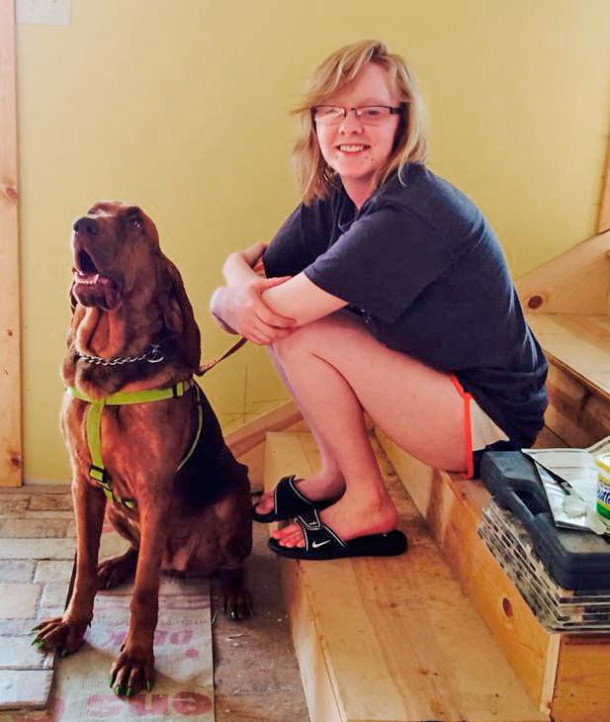 Deciding to purchase or rescue a dog, whether it is for a family pet or to go into the show ring with the goal of going to the Westminster Kennel Club or the Eukanuba dog show is a huge decision, one not to be taken lightly. Our family has owned several different breeds of dogs throughout the years, as it is an unfortunate truth that we will all out live our beloved canine companions. In the past, we have purchased and rescued several different breeds from Australian Cattle Dogs (Blue and Red Heelers), a Shar-Pei, Yorkshire Terriers, a Great Dane, a Standard Schnauzer, various coonhounds, and several mutts along the way. Yet none of this history prepared us for a Bloodhound.

Our first Bloodhound was purchased on a whim. We "thought" that we knew everything there was to owning a dog and my husband had always wanted one. We purchased her online from what would be considered a "backyard breeder." Now before you judge, I have to admit that the place we went to and purchased our "Dukes Pippa Ann" was one of the cleanest kennels I have ever seen. We walked through the buildings and viewed the various specimens that they had on hand of other breeds. There were no sores, illness, feces, etc. anywhere and all of the dogs were happy. We thought we had crossed all of our T’s and dotted our I’s. So we brought "Pippa" home.

We thought that we had the most beautiful bloodhound in the world, and she was to us. I have to admit at this time that I was on the fence about a Bloodhound. My husband was the one who really wanted the Bloodhound. He had for many years. I was not too interested in all of the "slobbering" that one incurs when dealing with a Bloodhound, but that was soon to change. 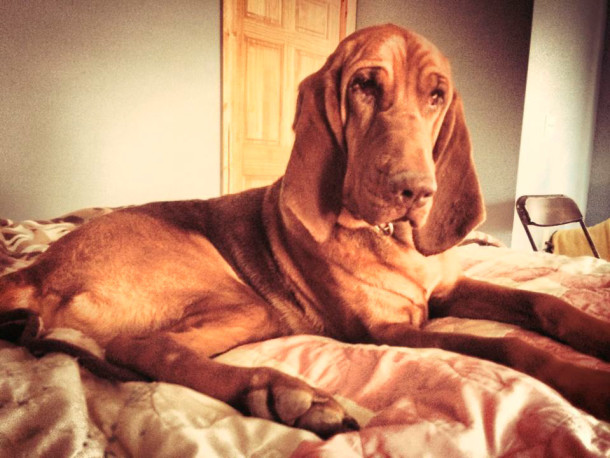 he first two nights my husband slept next to her crate on the couch because she was lonely – this was not endearing her to me at this time and completely out of character for him! Soon after that, we realized how delicate their stomachs can be and he spent several nights taking her out every hour with literally the howlers, so to speak.

Pippa was purchased with the intention of training her for Search and Rescue or SAR work. But it was not long before I was in love with her and wanted to show her to everyone and win BIG ribbons, because she was the best, right? So, I got online and entered our first dog show which was in Joplin, Missouri. We met other dog show people and the excitement was in the air. We went to the new exhibitor meeting to learn what we were to do and we got our show book which had our name in it along with Pippa’s name. So exciting! 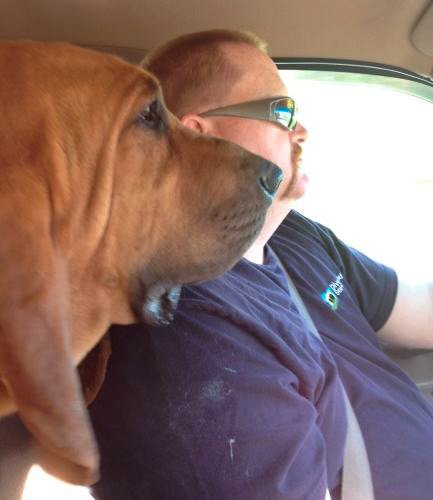 We showed up to our ring side early, because we wanted to watch other breeds show and see what we needed to do once Pippa and I were in the ring. That was where we soon realized that our Pippa was not so grand. She really didn’t look like the other Bloodhounds present. She had the main characteristics – long nose, long ears, tail that curved up, a saddle, but she was different. The other bloodhound people at the show that day were very nice and friendly. They have become long term friends and with kind words they talked to us about our Pippa girl.

We soon learned that they are NOT the lazy dog that you see on the Beverly Hillbillies show – I think that dog was either doped or 20 years old. A Bloodhound puppy is FULL of energy and curiosity and MUST smell everything. I soon learned that when we came home from the store with any shopping bags, Pippa needed to check out each one by sticking her head inside them. She never took anything, not even food, but she had to check it out and it was easier just to let her do it. In a way, it was like she was looking out for us and making sure everything was safe to have in the house. It sounds good anyway. We always said she was "shopping."

As time passed, I found myself looking forward to seeing Pippa at night so I could massage her long soft ears and let her check my ears out while I was doing it. One will find that most Bloodhounds are amateur ear, nose, and throat doctors and must check these items almost daily for good owner health. Some are also practicing proctologists and while it needs to be allowed, it should be held in check to avoid offending the human patient. 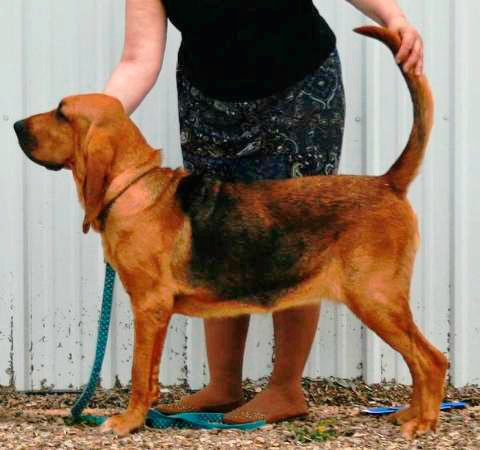 We soon found out that while her structure was not horrible she was not correct compared to the AKC Bloodhound breed standard. What are breed standards? Well, they are written descriptions that each national breed club writes for the AKC by which a breed is to be judged. Each breed was developed for specific functions throughout history and based on those functions each breed establishes "an ideal." Now remember earlier when I mentioned how clean and well maintained the kennel was where we purchased our Pippa girl?

Well that is not enough. You need to also look at the overall structure of the Bloodhound to see if it is as close as possible to the ideal breed standard. The best way to do this is to work/be mentored by an American Bloodhound Club (ABC) Breeder who works to produce that described "ideal" with each litter.

Now that is not to say that there are not different "styles" within the breed. The Bloodhound breed standard’s focus is on form and function, which allows for differences in style. With that in mind, it is best to learn about the standard. Based on this, pick the Bloodhound that is best for you from a Breeder you like. 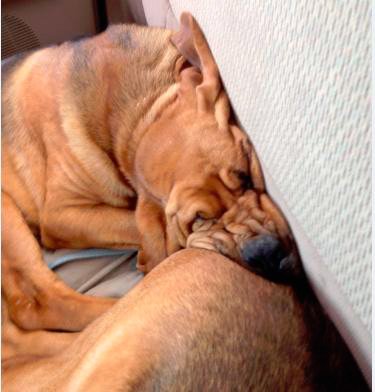 Of course once we understood, we started looking around at other dogs and making notes on what we liked and what we didn’t like. We continued to show Pippa for a year because we enjoyed meeting new people within the breed and we were also able to meet breeders. We soon added two more Bloodhounds to our family – Moose and Guin, and have fallen more in love with them than we thought possible after loving Pippa.

All in all, I would not give my Bloodhound up for anything and I look forward to learning more and growing more with this breed.

20 More Things I learned about Bloodhounds:

1. Major counter surfers – it is best to train early that the kitchen is off limits or ALL counter tops, tables, etc. are OFF LIMITS; don’t turn your back.

2. Slobber is just a sample of DNA that shows how much your Bloodhound truly loves you. It can also be a substitute for coffee creamer as one of our friends found out.

3. Once you are out of the puppy stage, they do have times during the day that they are huge couch potatoes, but this will not be for at least a year or two.

4. They have NO IDEA how big they are. Even at one hundred and twenty plus pounds Moose believes he should still be able to sit on Mom’s lap.

5. Some males can be very protective of the family – but each Bloodhound male is different.

6. Some females can be very shy and introverted – but each Bloodhound female is different.

7. They will always love you no matter what. 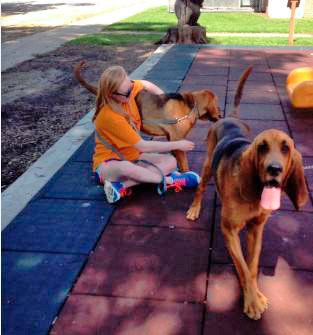 8. They are picky eaters and can worry their human parents to death when they will not eat regularly. This appears to be normal throughout the puppy stages as they are growing. We have heard similar stories from many different people.

9. They are not normally big on baths, but preteens and teenagers normally aren’t either so no big change for us on that one. We just washed them anyway.

11. You will never want a different breed of dog after you have owned a Bloodhound.

12. They MUST smell everything and it is best to just let them within reason.

14. They must always be free ONLY in a fenced in yard. Bloodhounds are very focused once they pick up a trail.

16. They love to give hugs. I know this seems odd and some will say it is a show of dominance and maybe that is true, but each one of ours will come up when you are sitting down and lay their head on your

shoulder wanting to be hugged. My favorite thing.

17. They take great selfie pictures especially if they are lying on their backs with all of their wrinkles in weird positions.

18. They can contort their bodies into the most uncomfortable positions and sleep peacefully. It is almost amazing, like they don’t have bones.

19. They will use their sad eyes to get out of trouble.

20. They are very smart. Some can learn to open closed doors and know how to hide objects in those lips to sneak them in and out of the house like toys, pears, socks, etc.