You Be The Judge

You Be The Judge!...By Robert Cole 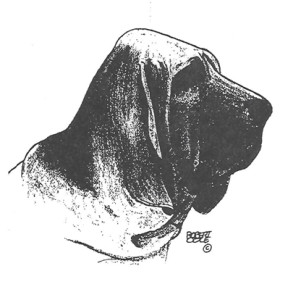 Place this first class of American bloodhound champions in order of preference. Each one has won at least one Group placement. Normally, they would be competing for Best of Breed as Specials; however, judging them as a class involves thinking in terms of first, second and third.

I chose to use real-life champion group place winners rather than manufacture what must appear in the case of at least one of these three bloodhounds to be caricatures of a noble, ancient breed. I could have improved on each but what would be the point? You go with what comes into the ring.

Before we begin there was a piece of advice in the American Bloodhound Club Judges Education Packet that was also stressed verbally at the 1993 Bloodhound Seminar that is worth repeating. It reads: “We have a big, sloppy dog. If you are concerned about your clothing and hands – don’t judge this breed. Nothing is more evident than a judge who dislikes the breed they’re judging.”

The general appearance of the ideal Bloodhound is well-described by Charles Henry Lane, breeder, exhibitor and judge, in his book All About Dogs, written in 1900. It is an excellent basis for judging. Mr. Lane wrote:

“The hound strikes you as not over-large, but with great character, quality and much dignity. Well-knit, plenty of bone, symmetrical, straight legs, wide across the back, full in body and back ribs, and game in temperament, with fine, deep-sloping shoulders, enormously powerful hindquarters.

The points associated with the Bloodhound are as follows: Skull: long, narrow and very much peaked. Square, deep muzzle. Ears thin, long, set on rather low, hanging in shapely folds close against the face. Eyes, dark in color and deep set, with lustrous lids, triangular in shape, showing the red haw. Flews, long, thin and pendulous, the upper overhanging the lower lips. Neck, rather long, and slightly arched toward the base of skull. Plenty of dewlap, wrinkled skin of face very loose and abundant. Short, close-lying coat, thin skin, sloping and deep shoulders; broad muscular loins; well-let-down in the brisket; powerful thighs and second thighs. Strong, straight legs, feet round and hocks well-bent, stern tapering and carried high. The general appearance should be that of a high-classed, aristocratic and very dignified animal, who looks as if he considered himself fit company for emperors and would not care to associate with any except those belonging to the upper circles.”

Which of these three Bloodhounds comes closest to fulfilling these requirements? The foregoing description helps to formulate a word picture of the ideal, and I am sure you have found the best of these three; however, there is more. For instance, the Standard advises that. “The chest (brisket) is well let down between forelegs, forming a deep keel.” This would position the elbow slightly above the bottom line of the brisket. What appears to be a deep brisket on these three Bloodhounds (and seldom included in artist’s drawings) is actually a loose roll of skin on the underbelly which can be lifted off the body from above. The true brisket on these three dogs is level with the elbow, and their forelegs are either too short or their bodies are not deep enough.

Regarding heads: the outline of the skull should be on nearly the same plane as that of the muzzle; divided equally by the stop. The occipital peak should be very pronounced and the head should be in proportion to the body. All of these Bloodhounds fall short in this area.

The forechest doesn’t receive mention in the Standard but is described as pronounced in the ABC Judges Packet. The neck must be long to bring the nose close to the ground. Dog B could have more forechest and a longer neck. Short upper arms are a problem in this breed but not with these three. However, Dog A could have better shoulder layback, and Dog B a longer shoulder blade.

Dog A and Dog B lack bend at stifle, a current fault breeders want judges to take note of. Dog C’s hind legs depart in another direction: the second thigh is too long. A line dropped down from the point of buttock should line up with the front of the rear pastern. Speaking of buttocks, there should be a shelf projecting out beneath the rather high set on tail.

This class of champions introduced more faults than virtues and demonstrated their effect on balance. I placed Dog C first, Dog A second and Dog B third.

These three Bloodhound champions have all placed at the Group level more than once. One of them could be said to represent typical; the other two provide by departure further appreciation for current Bloodhound balance. Based on discussion up to this point, place these three dogs in order of merit.

This dog represents typical. Everything that was wrong in the first class is right on this dog.

This is a sound young Bloodhound champion who appears to stand high on the leg because his keel (brisket) hasn’t fully developed. When it does, the chest should drop down well between the forelegs. Until that happens, he is balanced but not balanced as a Bloodhound.

I selected this example because at first glance he appears impressive and you have to look closely to see where his front has gone wrong. Usually in most breeds where the upper arm is steep, the forequarters position forward on the body and reduce forechest exposure. This hasn’t happened here. His shoulders are good and his upper arm has good length, but the latter has steepened, forcing the body to rise up above the elbow. If you ignore the loose skin under the body, you will see that the deepest part of the true brisket is three inches above and rearward of the elbow. The point of forechest, although pronounced, is low on the body. It should be half the distance (height) to withers, about on the level with point of buttocks. The topline is level because the bones of the hind legs have also steepened and are sufficiently long to balance with the raised front.


Based on the AKC Standard Approved January 9, 1996

Disclaimer: This article is provided by the American Bloodhound Club purely as the personal opinion of the author for informational purposes only. The American Bloodhound Club, it's members and the author make no warranty, express or implied, or assume any legal liability or responsibility for the accuracy, completeness, or usefulness of this information or will be liable for any loss, damages, claims or injury that accompany or result from any use of this material. This article may not be copied or distributed without the inclusion of this disclaimer